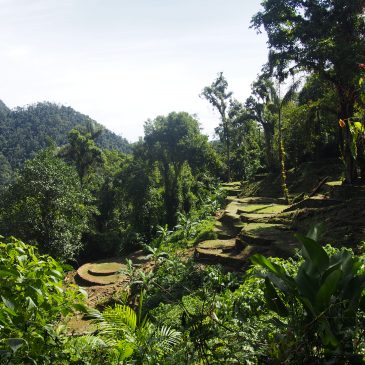 4 days in the Colombian jungle. 4 days of mud, sweat, humidity, rain, river crossings and many mosquitos. 46 kilometer of up and downhill walking. Getting to Ciudad Perdida – the Lost City in the Sierra Nevada isn´t easy, but that´s why it is still magical. It was worth every step.

Long before the Spanish arrived to Colombia the Sierra Nevada de Santa Marta on the Caribbean coast was home to indigenous communities with the Tayrona being the dominant one. They constructed hundreds of settlements in the mountains. Ciudad Perdida is believed to be their largest settlement. It was discovered by grave robbers in 1974, announced to the government in 1975 and in 1976 the official excavation began and lasted 8 years. Back then, it was difficult to visit the site, especially as a tourist. The area was full of coca plantations and was ruled by guerillas and the paramilitary. When in 1990 the Colombian government offered farmers a compensation to destroy their coca plantations (Plan Colombia), many of them started to dedicate themselves to tourism. However, it was still not safe to travel. The paramilitary still ruled the area and in 2003 8 tourists were kidnapped by guerillas. They were released after 104 days of hostage in the jungle. Nowadays, the area is safe and the military presence (the legal one, it is a bit confusing here in Colombia) is strong to make sure it stays so.

Of course this trek was on our list since the first day we heard of it. At this stage of our travels we were not very keen anymore to spend four days without comfort. But we were so close that we still had to do it. So we were picked up at our hostel after two hot days in Santa Marta and drove in a jeep to the village of Mamey, the starting point of the trek. After a huge lunch we set off into the jungle. On the first day we hiked for only 3,5 hours and we didn´t find it to exhausting yet. Unfortunately it started to rain heavily after 20 minutes of walking and never stopped. We went uphill for a long time but it wasn´t too bad (compared to Nepal). 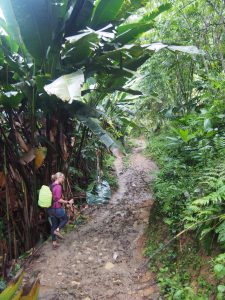 Once at the top of the first of four mountains to climb on the whole trek, we descended again on a long, really muddy path. The rain and mud made it difficult to walk. 20 minutes before we arrived to our camp we reached a river. Due to the rain the water had raised really high and the current was quite strong. Our guide Javier wasn´t sure what to do. After 20 minutes of waiting for the water level to drop he just crossed the river to get a rope. He once slipped and almost got washed away. 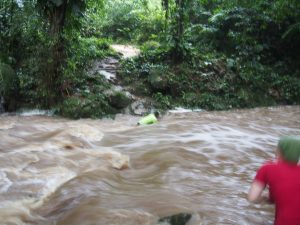 The water was more than waist-deep. With the rope we were able to cross. All our clothes were wet when we arrived. The guide somehow managed to carry our belongings on his head. 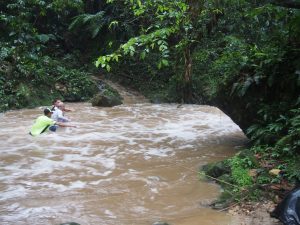 We arrived to Camp 1 soaking wet. The camps all were very basic, with 40-50 bunk beds lined up. All the groups stayed at the same places at night. After dinner and a quick shower, everyone went to bed around 8 pm. Since there isn´t much light, there isn´t anything to do at night. We had heard from others that the beds were full of flees and bed bugs, so we weren´t really excited about the nights. Every night it was like playing roulette – either you were lucky or not. Somehow we were lucky and didn´t have any problems in any of the three nights. However, the beds are really dirty and the sheets are definitely not changed daily. We were glad we brought our sleeping bags.

On the second day we got up at 5 am and had breakfast. They served great hot chocolate and a rich breakfast. In general, there was so much food on this trek that it was almost too much. Putting our clothes back on was hard – everything was still wet. We started hiking again at 6am and guess what – it was raining! For another 3,5 hours we hiked through rain and mud, crossing another river. Luckily this one was only knee-deep. But our shoes just never dry… 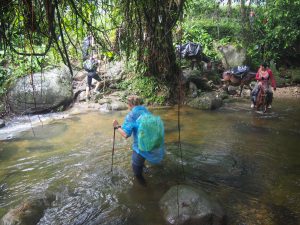 We arrive at Camp 2 at 9:30 am and stay here for two hours. After lunch we move on. The sun is finally shining. But as soon as we started our 1,5 hour ascend, we hoped for rain again – it was just too hot. So no matter if there was sunshine or rain, we were always wet. Either from river crossings and rain or from sweat, it didn´t make any difference. 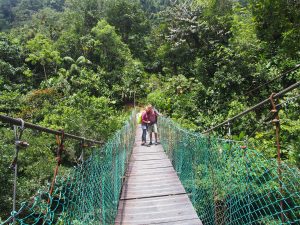 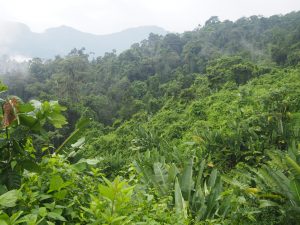 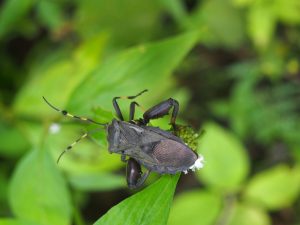 We reached an indigenous village on the way and learned that the Kogi are the closest descendants of the Tayrona culture. Some of the camps we stayed in were managed by them as well. It was easy to recognize them because they wore shiny white clothes – a strange thing to see in the jungle. When they were clean it looked great, but most of the time they were dirty and muddy.

After an exhausting uphill hike we arrived to the top for a small break. Here we had the best pinapple of our life! It was also the first place to see the military. They watched a football match here 😉 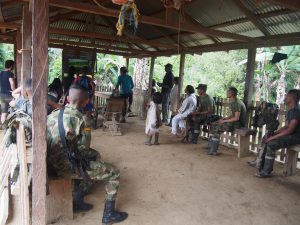 After another 1,5 hours we finally arrived Camp 3, right at the bottom of the hill of Ciudad Perdida. We had walked 16km today and were really exhausted once we got there. After another big dinner our guide told us the story of the kidnapping of 2003. He had been working as a cook for the kidnapped group, but was lucky to leave one day early, so he wasn´t involved. Again, we went to bed around 8.

Today we started hiking at 5:40 am to be ahead of the 74 Colombian students who were on their way to Ciudad Perdida as well. This morning was finally sunny! After 20 minutes up and down and another river crossing we reached the 1.200 stairs which would finally lead us to Ciudad Perdida. It was a steep, but short climb until we were finally there! 23 km done! It doesn´t sound like much, but with the heat and rain as well as the challenges of the jungle it was hard. But as soon as we saw this magical place we knew it was worth every second of it.

The site is at 1.200m in the mountains with great views. It is still party covered in the jungle which makes it much more mystical than Machu Picchu. It is also much less crowded with only around 100 visitors per day. Hopefully they will never build a cable car to get up here, it would ruin everything. 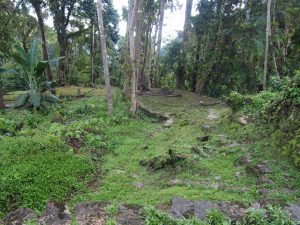 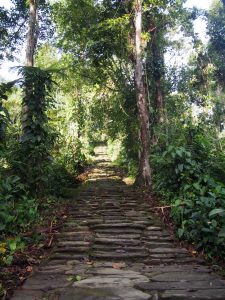 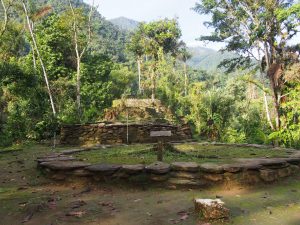 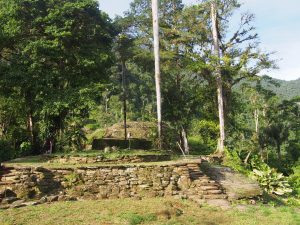 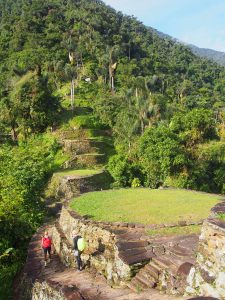 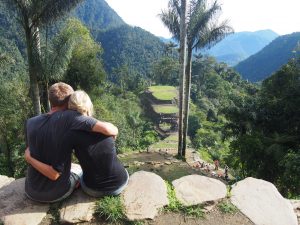 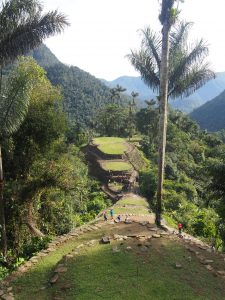 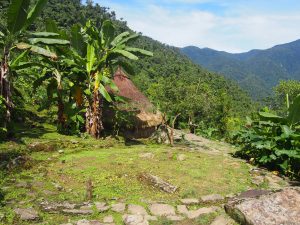 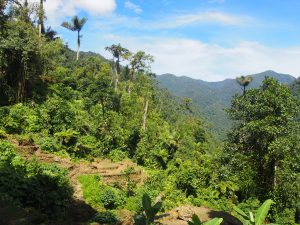 We spend around 3 hours at the site, exploring each sector and enjoying the views. In the end there is finally some time to swim in the river. The water is so cool and a great „relief“ from the heat. According to our guides we were lucky that that day the shaman of the Kogui was around. Every year in september he closes Ciudad Perdida for visitors and execute a spiritual cleaning of the place. We talked to him for a little bit, but the whole group felt kind of awkward because he didn´t show much interest.
We went back to Camp 3 for a short break and lunch. We would spend the night at Camp 2 again. It would only be 7 km to get there. But after 2,5 exhausting days with blisters starting to grow on our feet it was a long 3,5 hours. We were happy to get some rain again in the afternoon, the heat was just too much. At Camp 3 we prepared ourselves for the last day of the trip with a nice pasta dinner and an early night.

Finally the last day of the trek!

Today everyone just wanted to finish and some started running the whole trek without a break. We hiked a total of 15km. To Camp 1 it was 3,5 hours and we arrived around 9:30 am for some snacks and a break. 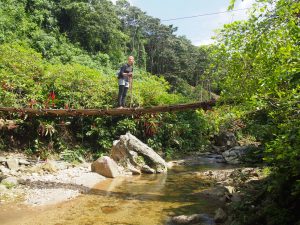 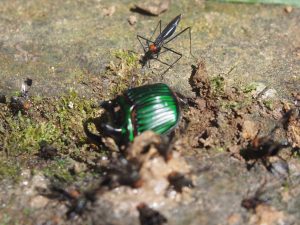 After that we reached the river which we had to cross with a rope on day 1. Today, it was only a small stream and we didn´t even get wet feet. Unbelievable… After the river there was a steep 1 hour climb through really muddy places. 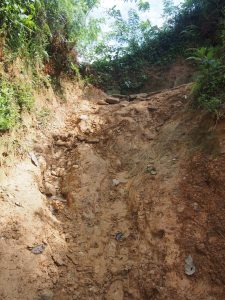 The sun was strong today and it got harder. Once on the top we thought it was almost over. We were wrong! The descend took us almost another 2 hours. When we went up, it didn´t feel like that at all. But on the last day, with the sun burning from the sky, the feet full of blisters and the muscles sore, it turned out to be a long way… 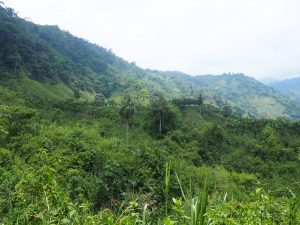 We finally made it back to Mamey around 12 o´clock, ready for lunch and a beer!

We spent the next 4 nights in Palomino, a small village by the beach. We didn´t move much here and just relaxed after this hike. We didn´t even care about the afternoon rain and a whole day without electricity…