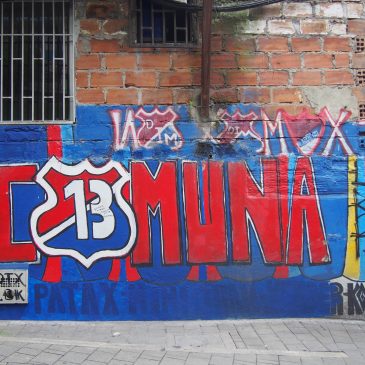 At some point we had to leave our coffee farm paradise and moved on to Medellin. The former capital of drugs and crime is now the place to go among travellers and we were curious. The city we encountered was totally different from what we had expected.

Medellin has suffered from drugs, crime and violence for a very long time. After civil wars and violence in the 1950´s and 60´s, the Medellin Cartel under Pablo Escobar took over the city and earned money with narcotraffic to the US. After Escobar´s death in 1993 people hoped for peace, but the paramilitars took over and continued the narcotraffic. Violence in the city was worse than ever. It was only in 2002 with the presidency of Alvaro Uribe that things started to change in the country, and especially in Medellin.

Uribe was known to be very strict in his fight against the guerillas. Medellin´s new mayor Fajardo started immediately to change his city´s history in 2004. He built schools and kindergardens, as well as libraries around the city. The infrastructure of Medellin is the best we have seen all over South America. There is a metro through the city which is connected very well to buses, a tram and a cable car. The cable car has been built to connect the poor areas of the city. Now, everyone has access to the city. 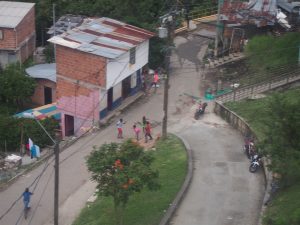 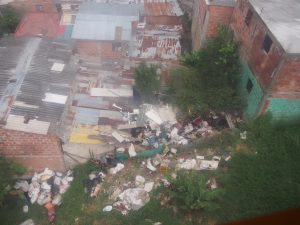 Comuna 13 is a special example for the city´s change. As one of the poorest parts of the city it got famous during the 80´s as one of the most dangerous places. Crime and violence ruled the area. Comuna 13 was almost inaccesible, people had to climb stairs to reach their houses. Now, an escalator runs through Comuna 13 which has improved people´s daily life a lot.

The walls around the escalator are full of grafittis by local and international artists. 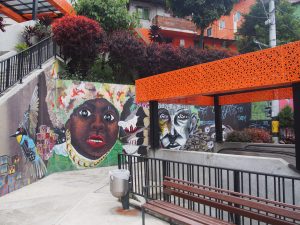 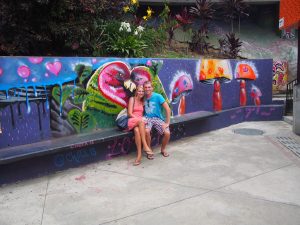 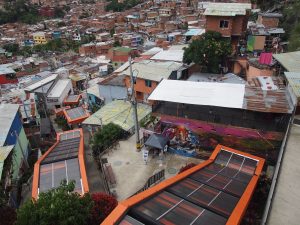 The escalator attracts many tourists nowadays and this is an opportunity for the neighbourhood. We met a lot of locals here that were incredibly friendly and proud of our interest in their home. There wasn´t one person begging in the street. Everyone tried to learn and speak english, and people sold all kinds of homemade food or souvenirs, or even offered tours through the area. It seems like everyone here is really living the change and wants to make the best of it. We haven´t felt unsafe ever. Who would have known ten years ago that tourists would have fun on the slide in Comuna 13 (not recommended in a skirt 😉 )? 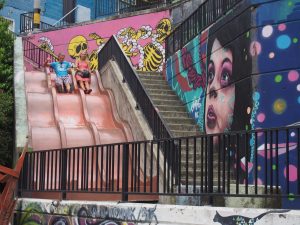 The experiences we made in Comuna 13 were the same as anywhere else in the city. People were curious to see foreigners and they were also proud that they are now able to visit. The city center isn´t beautiful, but its people make it worth a visit. The district of Poblado is becoming more and more popular among tourists for partying and is full of gringos. We didn´t like it too much… 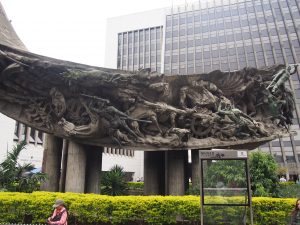 We went on a very good walking tour through the city which also explained a lot about its history. At one point, the question was raised how people here can still be so happy after everything they have been through. So our guide gave us a very emotional speech. She told us that first of all, many people try to forget the bad memories. And on the other hand, they take every little moment of joy and celebrate it. For example, Colombia played once against Germany, and Colombia goaled in the last minute so that the game ended 1:1. We don´t know when, because it doesn´t sound important. Our guide said that in Colombia, it was celebrated like the world championship. The metro in Medellin is also a sign of hope for its citizens. It means change and future and everyone is proud of it. We believe that we should all be more like that instead of complaining about everything.

There is a sculpture of a bird at a square, which was once bombed during a concert. Many people lost their lives there. The bombed sculpture is still there, but next to it there is a new one. The old one is supposed to remember the tragic event, the lives that were lost and the city´s general history. The new one stands for the future. 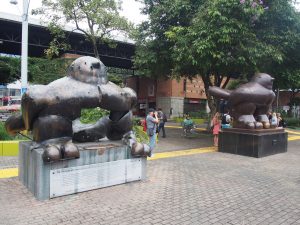 All of our German readers interested in some more information check out the article Das Wunder der Comuna 13.