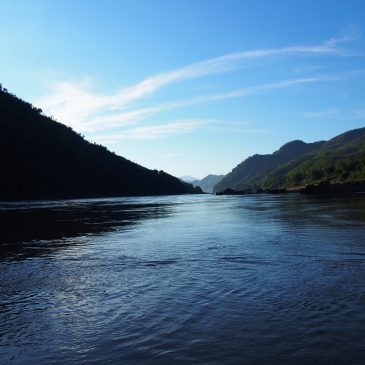 After just five days in Thailand, we left again. But we will be back in December! We took a bus to Chiang Kong, which is a small town right at the border to Laos. It was a pleasant ride of just 5 hours. Then it was time to get to the border. We have crossed some Asian borders in the past and they were all exhausting and took a long time. So we expected the worst and were surprised. We had to take a tuk tuk to the boarder and go through Thai immigration, which was uncomplicated and took just 2 minutes. The Thai-Lao boarder is marked by the Mekong river. After „leaving“ Thailand you have to take a bus to cross the friendship bridge. This is a bit unnecessary but we had no choice.
On the other side we had to get a visa on arrival for Laos. We filled out the form and handed our passports and a photo to the guy from immigration. He just collected all passports from all arriving people, and then we had to wait. At other borders we waited up to 3 hours for our passports. Surprisingly this was quicker and just 15 minutes and 60 Dollar later we entered Laos. That was the most comfortable Asian boarder crossing ever!
From here it was just about 10km to Huay Xai, where we would stay for the night. We checked in to a guesthouse with riverview so that we could enjoy a nice sunset on Mekong. After a nice dinner and some beers with the people we met at the boarder, we went to bed early.
We had decided to take the slow boat to Luang Prabang instead of the bus. The 2-day ride was supposed to be beautiful and relaxing. The next morning we went to the boat at 9 am because there was some confusion about the time it would leave. Of course we were too early, the official departure time was 11am and in the end it left at 11:45. 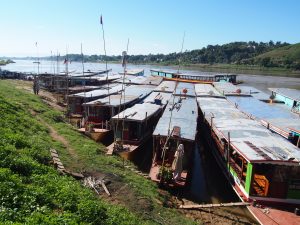 In the beginning it seemed like the boat wouldn´t be too crowded, but the later it got the more people arrived. There were seats like in a bus for around 120 people, but the boat left with at least 20 people more. With all these people and their luggage, it was really crowdy. 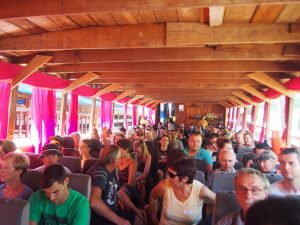 If you plan to go on this trip, you should be at the boat before 10 to get a good seat. Today´s drive was about 6 hours and the landscape around us was beautiful. Beautiful mountains and forests surround the Mekong at this point. There are only a few very small villages on the way, and we stopped at most of them to get some more people in or out. 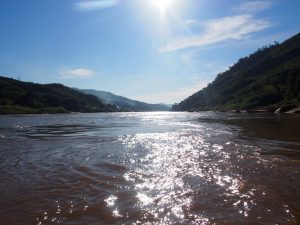 We arrived in the villlage of Pak Beng, which was slightly larger than the others. It was easy and incredibly cheap to get a room here – we paid 5.000 Kip (5€) for a room with bathroom and riverview! The best thing about it was that we were able to see two elephants early in the morning on the other side of the river.

The next morning we went on in two smaller boats. They were not as crowded as the day before. The scenery today was similar to the day before and we enjoyed another relaxing day on the river. 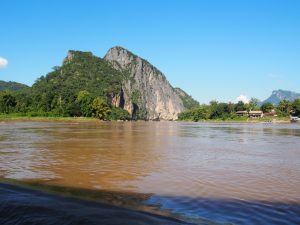 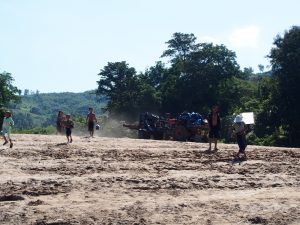 After 6 hours we arrived in Luang Prabang and it was just another short tuk-tuk ride to the city center.