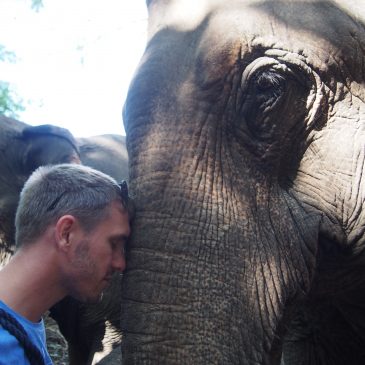 Laos – the land of the million elephants. Unfortunately just about 400 wild elephants are left. The Asian elephant in general has been listed as an endangered species since 1986 as the total population has decreased by around 60-70% in just 60 years. In Laos and Thailand the elephants have been used for logging. To domesticate them, people usually broke their spirit by using the „carrot and stick“ method. Government is trying to take elephants out of the logging industry. But then, tourism still remains another problem. Elephant riding is one of the first thing on people´s mind when travelling to Thailand or Laos, and there are a lot of offers especially in the north of both countries. There are ridings and in the past even elephant shows have been offered, similar to a circus.

It was a big wish for both of us to be able to interact with elephants. But at the same time, we knew that we definitely would not want to be part of the described world. Riding an elephant is never a good experience for the animal. Depending on the way you ride them, it can seriously hurt their spines. And even if it doesn´t, there are just too many stories of animals being treated in terrible ways, beaten, kept in chains and cages and totally exhausted from carrying tourists all day. We have even seen that at Angkor Wat, Cambodia where a terrible looking elephant had to walk around the same temple all day.

Especially in Thailand there are more and more companies emerging that offer elephant experiences without riding. We had a look at a few of those, but none really convinced us. They still let a lot of tourists surround one elephant and make it look like an attraction in Disneyland. So while in Chiang Mai, we decided we would not want to contribute to that kind of tourism. In Laos we also hadn´t heard about one reliable company that would be worth it. Even worse, there wasn´t even one company that didn´t offer elephant riding. So just by coincidence we walked past an office in Luang Prabang that attracted our attention. We talked to one of the owners for a while and he convinced us that their tour might be worth a try, let me explain why.

That night we went to our guesthouse and had a long discussion if we should book the tour. Out of all companies, this one convinced us the most. But at the same time we were wondering if we should really support elephant tourism at all. If people here can still make money with elephant tourism, there will always be all kinds of good and bad offers. So can we look at ourselves in the mirror if we do this? The answer is no. But still we took the decision to do it, this is why:

So is that enough to change our minds? We both agreed that it is. By participating to this kind of programme,  we contribute to a change in people´s minds. There will always be elephant tourism in Asia (at least as long as there are still elephants). But as soon as tourists start to think before booking a tour, and start making the right decisions, other companies might follow. 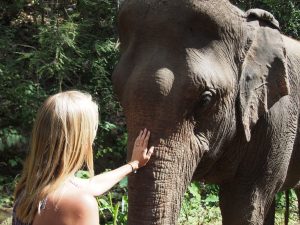 So what was the tour like? There are three different offers. Two half day tours and one full day tour. We decided to go for the half day tour in the morning with the baby elephant (11 months old). We arrived at the farm around 8:30 in the morning. They have a beautiful spot overlooking Nam Khan river. There is a big terrace restaurant where we sat down with Project Manager Prasop. He has been working with elephants for over 30 years. He started in the logging industry, later did shows and elephant ridings, until he changed his mind and started being more conscious about the way he treated the animals. He then built up the Elephant Conservation Center in Thailand and slowly started to convince mahouts to treat and train their elephants differently. His motivation to come to Laos was that he didn´t want the people here to make the same mistakes that the Thai made with tourism developing too quickly. He shared his stories and believes, and him being part of our tour made it even better.

When he had answered all of our many questions we took a boat to the other side of the river where the elephants were finally waiting for us with their mahouts! There was the mother and her baby, as well as a third elephant. 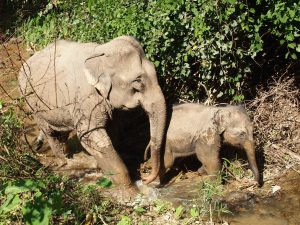 We welcomed them with some mangos, pineapple and bananas which they loved. Then they walked into the water and we were able to give them a bath. It was especially fun to see the baby playing in the water! After that we started to walk through the jungle, alongside another small river. The elephants did not have any chains and were allowed to stop whenever they wanted. They stopped a lot of times to eat whatever they found on their way. We were a small group of just one more tourist with us, two guides and the two mahouts. The guides found a perfect balance of us just walking behind the animals, stopping to play and taking pictures or other times just waiting for them as they stopped for food. Time passed too quickly and about 2 hours later we had to say goodbye to these beautiful animals. We had a very nice Lao lunch at the restaurant before we were taken back to town. 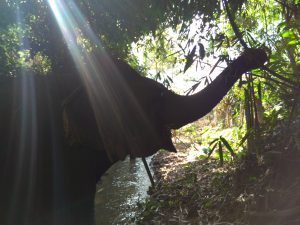 We have learned so much about the fascinting elephants today. We learned how to read their emotions and how to interact with them. We learned that elephants have similar emotions as well as social behaviours as we do. The tour also raised our awareness of the treatment of Asian elephants and the things that could really make a change. We do not just recommend this place, we especially hope that anybody reading this might think before they get involved with elephants the next time they come to Asia. 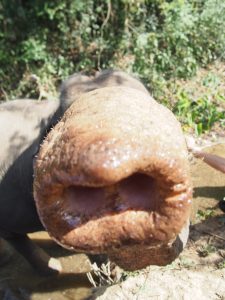 For more details, check out http://mandalaotours.com/

3 thoughts on “The elephant experience – an ethical decision”