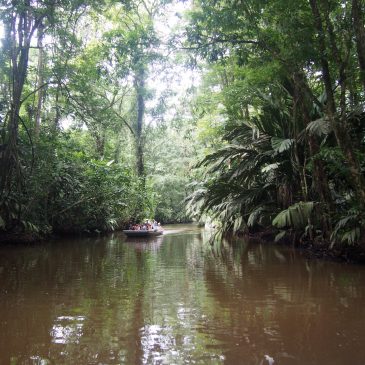 Tortuguero National Park – with its canals on one side and the ocean on the other is known for its biodiversity. Due to 6000mm of annual rainfall it is a tropical green paradise, and it is home to over 400 bird species, 60 species of frogs, 30 species of freshwater fish and three monkey species. In addition to that, caimans and crocodiles are often seen in the area. Jaguars are uncommon sights, but they also have a rather big population in the park. In two days here, we saw more wild animals than on the Amazon.

As we are now travelling with Sandra´s parents, travelling gets more comfortable and hotels get nicer and nicer. For Tortuguero we booked a two-night tour with a nice hotel. To get here, you have to take a taxi boat which is already part of the fun. Driving through the canals of Tortuguero is like a boat ride on the Amazon. After 5 minutes on the river, we saw our first crocodile! 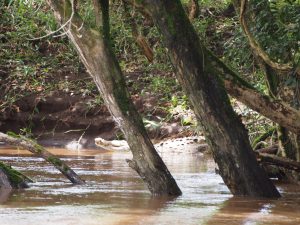 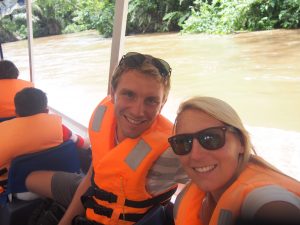 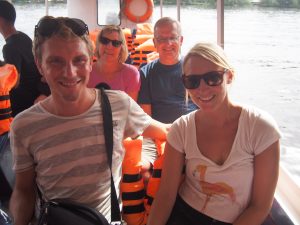 We arrived to our beautiful hotel Laguna Lodge, which is a few kilometers from Tortuguero Town in the middle of nowhere. It is located on a small strip of land between the canal on one side and the ocean on the other. Within a walk of 200 meter you can either enjoy a river view or the ocean. Unfortunately you can´t swim in any of them. The river is full of crocodiles and caimans, and the ocean has strong riptides and sharks. Luckily we had a pool. 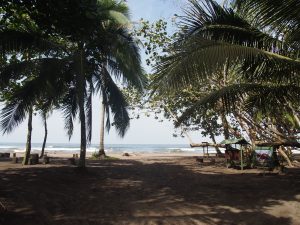 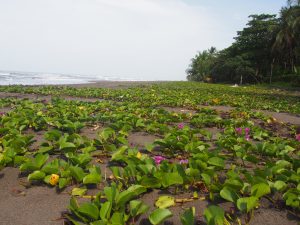 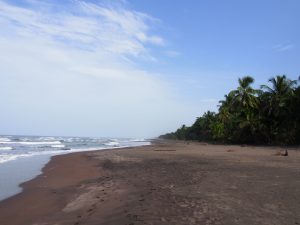 Even within the hotel there was a lot to discover. The tropical garden was full of beautiful plants and a lot of animals were seen here. 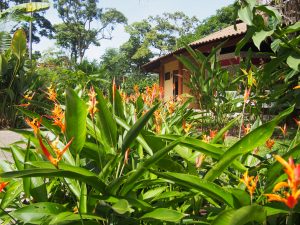 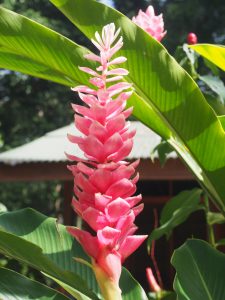 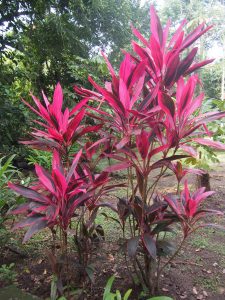 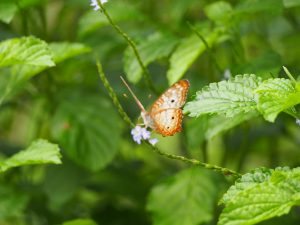 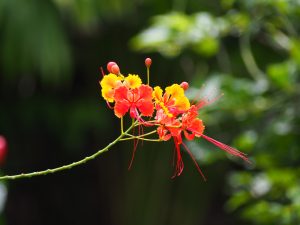 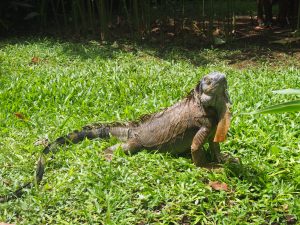 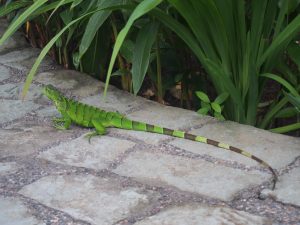 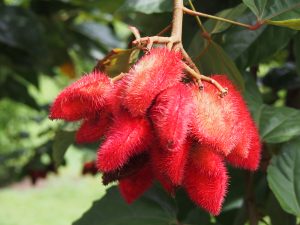 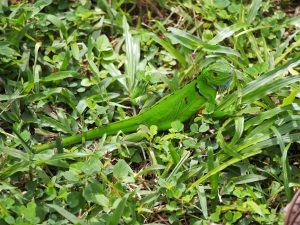 The hotel had a small frog garden. We came here in the dark with a flashlight to find the red-eyed frog, only active at night. It´s hard to spot them because they hide in the trees. Jens managed to find one! 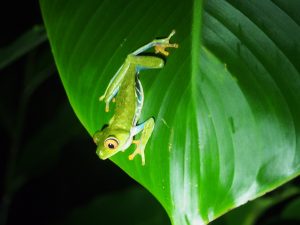 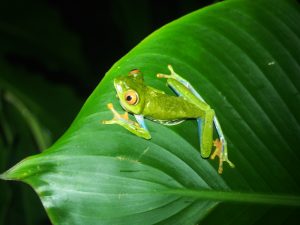 One day when we just walked to the beach, we spotted two tucans up in the trees. Sandra, who had visited Costa Rica many times before, was never lucky enough to see them close in the wild. So this was a very special moment. We even saw two different species as you can see from the colors of their beak. 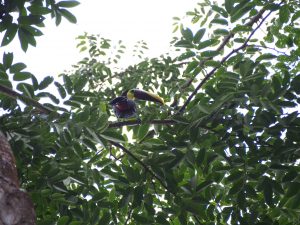 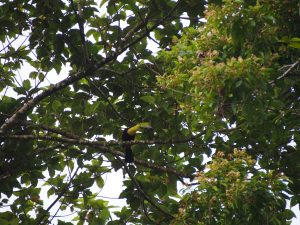 One of the main reasons many people come to Tortuguero is to watch sea turtles nesting. The season for this is from July to October. In July and August it is mainly possible to see the huge sea turtles laying their eggs, while in September and October the babies hatch. We were told that on a stretch of seven miles, 18.000 to 20.000 turtle nests are found in one season. Sea turtles nest in the dark, so the beach is closed from 6 pm and you can only go with a guide in order not to disturb the turtles. One turtle lays between 80 and 120 eggs. Out of those, onle 1-3% survive until maturity. There are too many predators. Many animals eat or destroy the eggs at the beach. Those who manage to hatch might be eaten by birds, crabs, wild cats or dogs on the beach. When they reach the ocean, sharks and many other fishes wait for their lunch as well.

Seeing the nesting and hatching is an incredible experience. Sandra had already seen both years ago in Tortuguero, while Jens had seen it in Australia. It was very tempting to go and see it again. However, we heard before that there are too many people around one turtle and the hotel did not convince us of the tour. You have to know that when a turtle gets out of the water and is disturbed by anything, she will return to the ocean. She tries three times before she looses her eggs in the water and they all die. Having 100 to 200 people at the beach must definitely be disturbing. While they nest, they are supposed to be in trance and do not notice anything. You can only approach them from behind and no lights are allowed. We know now, that 10 groups of 10 people each approach one turtle while nesting. We also heard that not everyone is quiet as they should be. We decided that this was a once in a lifetime experience and we would not go again.

Moving through the national park can only be done by boat. Of course we had to do a guided boat tour to see the wildlife. 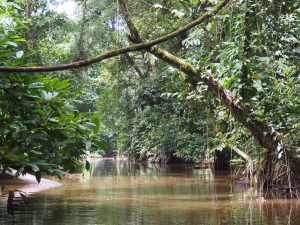 The best time is very early in the morning when the jungle awakes. We were too lazy to get up at 4:30 am and also didn´t want to pay the extra tour, so we went at 9 am. We were really lucky on this tour and spotted more animals than anywhere else. We saw all three species of monkeys that live in this national park – howler monkeys, spider monkeys and the white-headed capuchin.

We also saw two baby caimans hiding at the riverbank. 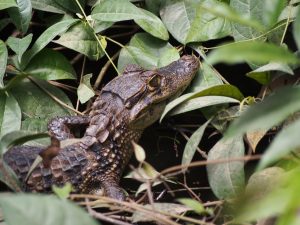 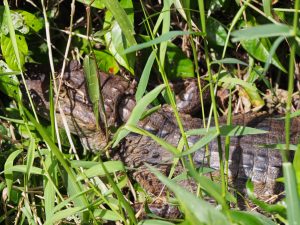 In a place with 600 species of birds, of course we also spotted some. Unfortunately we forgot their names, maybe you can guess 😉 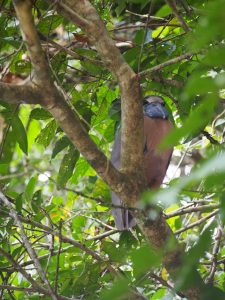 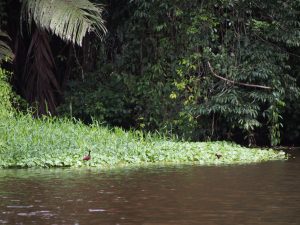 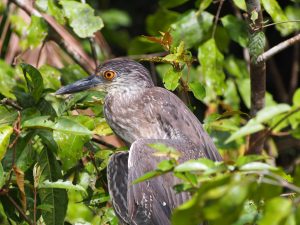 Our favorite couldn´t be missed on this tour – the sloth. We saw one hidden in a tree and another one that even had a little baby! 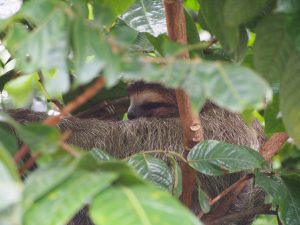 We spent the rest of our time here by the pool, walking along the beach or relaxing with a river view. Let´s not forget all the eating – there was too much food in our hotel!

The canals of Tortuguero and the beach with its turtles is a very special place. Even though it is a little expensive and difficult to get there, it is worth it.