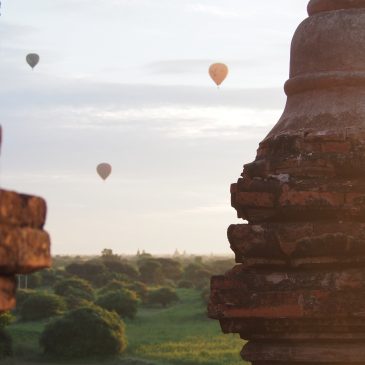 The question of the day (or of the last three days) – what is the best spot for sunrise and sunset and where the hell are the balloons?

Bagan is one of Myanmar´s main attractions and the Bagan Archaeological Zone consists of over 3.000 temples. Most of these have been built between the years 1050 and 1287. Each temple contains Buddha statues and many are still active religious sites. There are so many and each has ist own atraction. Some you visit for their Buddhas inside, others have hidden staircases and you can climb to the top to enjoy amazing views of Bagan, if you find the key holder to open the door for you. We even met a guy from Malaysia who spent several days in the area and tried to visit all (!) temples. But where to start? The biggest hype here is about sunrises and sunsets. Everybody watches the sunset, so the biggest temples are totally crowded with people. Sunrises have the better views and light, but not everybody gets up at 4:30am so you get a little more privacy. We arrived to Bagan after a 9 hour bus ride from Nyaungshwe and just had dinner and a shower. The next morning we got up early and as we didn´t know yet where to go we set of to Shwesandaw Paya for the sunrise. This is actually the most crowded pagoda but if you go to the lower platforms instead of the top, you get nicer views and less people. Unfortunately the morning was really cloudy, so we didn´t get the a good sunrise. There were also no hot-air balloons because of the bad weather.

We drove around all day and visited mainly the area of Old Bagan, which has some of the biggest temples like Ananda Paya. 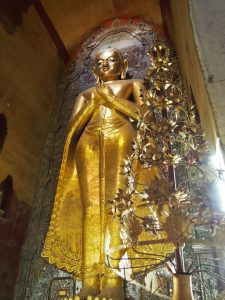 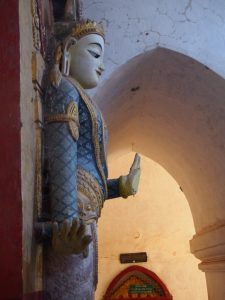 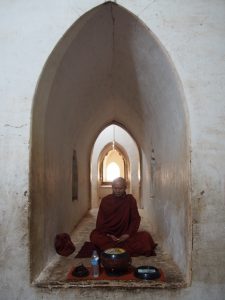 The best thing about Bagan is that you can rent E-Bikes for about 3-4€ a day and drive around the huge area just as you like. You can drive through many hidden streets and pathes to find even the most unexplored temple. Jens was just a little scared everytime Sandra was driving 😉 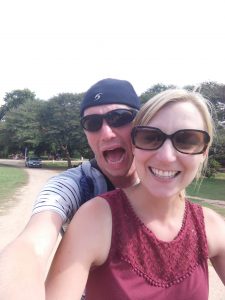 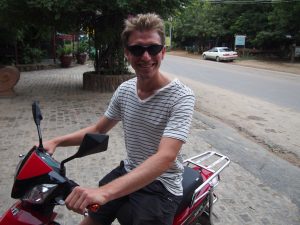 We also tried to find some secret sunrise/sunset spots, but unfortunately due to the earthquake in august 2016, many temples are closed for climbing. So we went to Shwesandaw Paya again for the sunset, and it was really a beautiful one, except for the crowds. Again, there were no balloons. As  we found out one day later, during this time of the year they rise only in the morning, not in the evening. 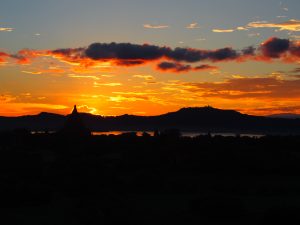 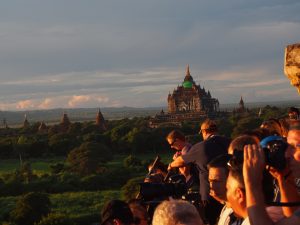 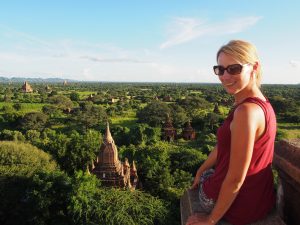 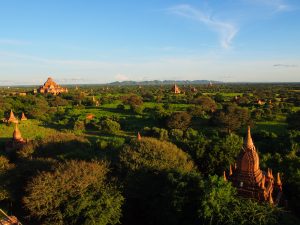 The next morning we were so tired that we decided to skip the sunrise. Big mistake – it was a beautiful clear morning. We spent the day driving to some more remote temples. It is really easy to get lost here for a few days, there is just too much to see! When the sun is out it is just unbearably hot, so don´t even think about coming here without a hat! 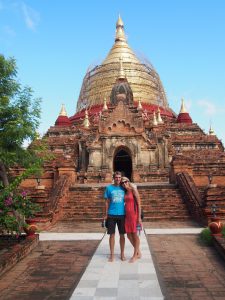 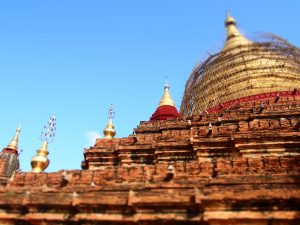 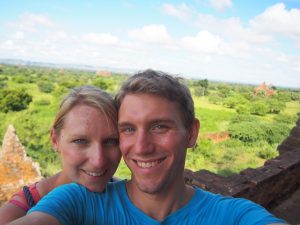 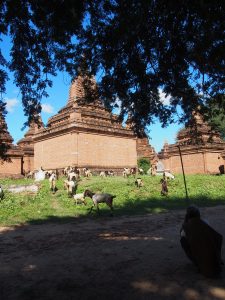 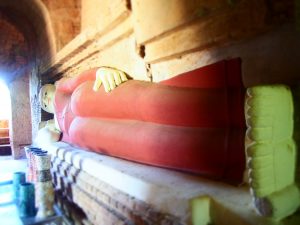 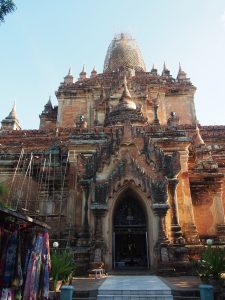 In the evening we went to South Guni Temple for the sunset. We read in a blog that North Guni should have the best sunsets, but it was closed due to the earthquake. So we went to ist smaller neighbour South Guni. In the beginning it looked like it was not too crowded, but by the time the sun set there were many people. 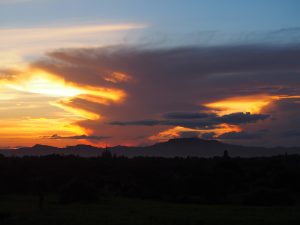 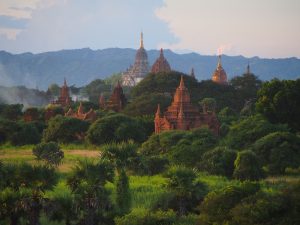 During dinner we argued whether we should get up for another sunrise. Sandra was too tired but Jens really wanted to see the balloons. So we decided that he would get up in the morning to see if the sky was clear, and if so we would go for the sunrise. So bad luck for Sandra, the morning was clear and we got up again at 4:30am. We went to South Guni again and this time we were almost alone there! The sun rose but there were no balloons. Jens was already very disappointed but then suddenly they showed up! We have to admit, it really looks nice wit the morning light, the temples and  the red balloons and was worth getting up so early. From South Guni we also got some great views as we wer close to the balloons and also to some of the bigger temples. But if you ever consider spending 300$ for a ride in the balloons – don´t do it! The go for only about 500 meters and the whole thing takes max. 30 minutes. That can´t be worth that much money. Just enjoy the pictures of the beautiful sunrise – finally 😉 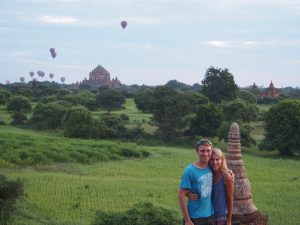 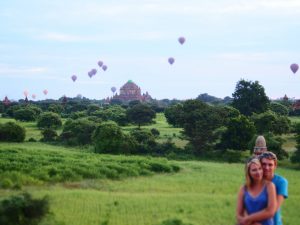 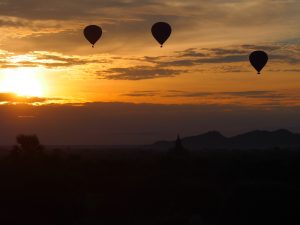 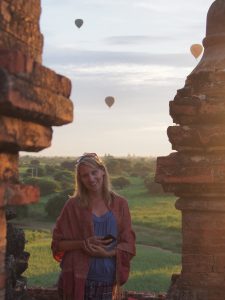 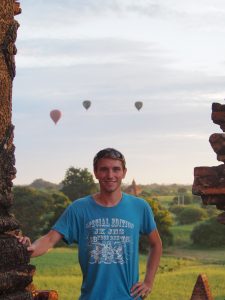 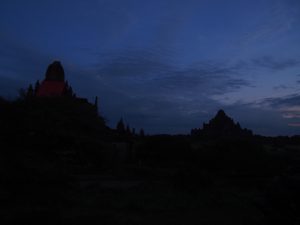 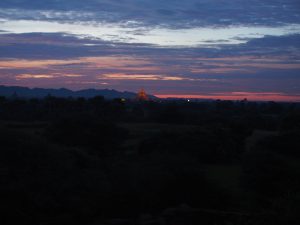 On our last day in Bagan we went about 1 ½ hours from the temples to Mount Popa. This impressive mountain does not only have amazing views from the top, it is also home to Myanmar´s 37 nats (spirits). The most important one seems to be Mae Wunna, the Queen Mother of Popa. We actually planned to take a guide to explain some more about the nats and the mountain, but unfortunately this was the first sight where you couldn´t find a guide right at the entrance. 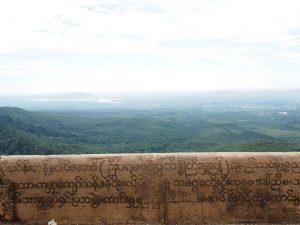 The taxi driver dropped us of at the train station of Bagan, where we took the night train to Yangon.

Our resume of Bagan: It is definitely a must-see in Myanmar, but if you have seen the temples of Angkor in Cambodia, it is not that impressive anymore.

2 thoughts on “Temples, Balloons and E-Bikes in Bagan”