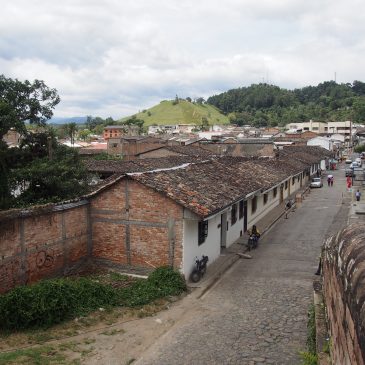 While travelling through South America, we met many people that are more or less doing the same thing as we are. Everyone travels either from the south to the north or vice versa. We rarely meet people that just travel one country for three weeks. And absolutely everyone told us how amazing Colombia was. So even though we hadn´t seen enough of Ecuador yet, we had to move on to have enough time for Colombia.

Travelling from Quito to an interesting destination in Colombia takes a while. So we stopped twice on our way up.

Our first stop was in Otavalo, just two hours from city. This indigenous town is famous for its market day on Saturday. Unfortunately we were there on a monday. There is still a big souvenir market every day, but that´s not very special. However, the surroundings of Otavalo are well worth a visit. We only hiked to Pechuga waterfall because we had only half a day in the city. We would have loved to go to Lago San Pablo right in front of Vulcan Imbabura as well, but we didn´t have the time. 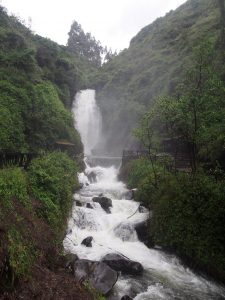 From Otavalo you have to take a bus to Ibarra (40min) and change to a bus to Tulcán (2.5 hours), the boarder town. From here it is another short taxi ride to the border. The border crossing was as easy as everywhere else in South America. We were really surprised how easy it was. Different to Asia, nobody cares how long we want to stay or whether we have a return ticket to leave the country. We just got 90 day visas everywhere.

From Ipiales, the Colombian border town, we took another 2 hour bus to Pasto, where we stayed for the night. It took 8 hours to get here from Otavalo. The city of Pasto is not very pretty and there isn´t much to see. The surroundings are supposed to be beautiful and we had planned to visit Laguna de la Cocha in the morning of the next day before moving on to Popayán. But then, something strange happened. We still had about $200 left from Ecuador and we decided not to exchange the money to Colombian Pesos, because US Dollar is the offical currency of Panama as well, so we would need it again. Right after we arrived to our hostel in Pasto, we left the hostel to find an ATM and some food. When we came back one hour later, the bag with our money was not in the place we left it and $35 were missing. Of course, nobody in the hostel knew anything. There is a possibility that we lost the money while pulling out our passports at the border, but we are pretty sure that didn´t happen. After this experience, we didn´t want to leave our stuff in the hostel the next morning to go to Laguna de la Cocha. So we left right away to Popayán.

Actually Popayán was just another stop on our way to San Agustin and we didn´t expect much. But we were positively surprised! We arrived really tired after another 7 hour bus ride and got to this lovely small colonial town. Popayán is also called the white city because all the buildings in the center are painted white. Every year before Semana Santa they have to be repainted, so it always looks shiny-white. 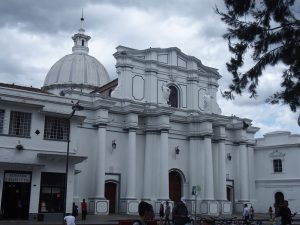 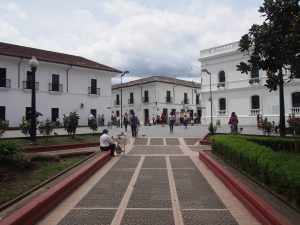 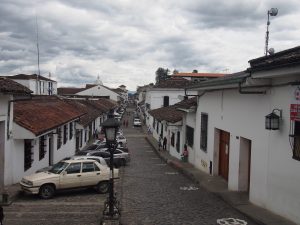 There isn´t too much to visit in the city. We wandered around for a day and had a lot of food – there are some really delicious local specialties.

After a day of walking we found Cafe Colombia – a bar/cafe with pool table full of men (women are allowed to enter) who drink beer or coffee and play games while watching football to Colombian music. A strange but fun mix. We had the best coffee in a while here and Jens enjoyed some Bundesliga games. 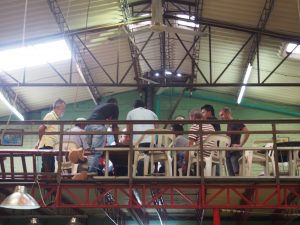 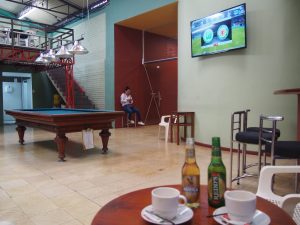