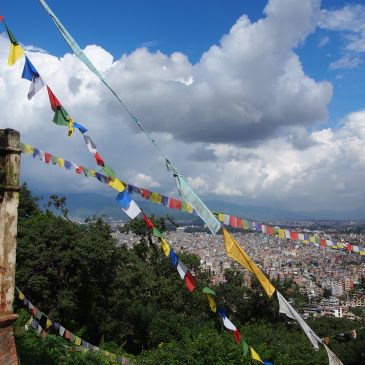 You either hate or love this city – we love it! It is loud and noicy and full of people, but there is so much to see around every corner.

When we arrived there was no electricity in our neighbourhood. Luckily we at least had a hot shower at night, because the next morning the water was also off for one day. Second night – heavy rainfalls and again no electricity.We are very glad about the power bank and flash light we bought (thanks Mama & Papa)!

We are staying in a hotel in Thamel, which is the tourist area of the city. Here you can find trekking clothes, a guide or something to smoke at every corner 😉 It is very easy to get around here and you can really buy anything you need for your trip in this country. At this time of the year there are almost no tourists around here, so it is still very quiet. The main season will start in October, so everybody tells us that in a few weeks the city will be full of people.

After a few minutes walk you leave Thamel and you notice right away that you are in another world. There are less tourist shops and people watch you even more. Since there are so few tourists, people look at us – both blond and tall – and sometimes even take pictures.
On our first day we just walked around the city and visited Durbar Square, the main square of the city with an accumulation of many temples. To enter the square you pay 1000 Rupie. Unfortunately a lot of buildings suffered during 2015´s earthquake, so there is a lot of construction and you can´t enter any buildings. The weirdest thing to see here is the Royal Kumari of Kathmandu. This is a young girl who was selected to be the living goddess of the city until she reaches puberty, she then turns mortal again. She shows up at the window of her temple for a few minutes a day and then people just stare at her – very strange. This is the balcony: 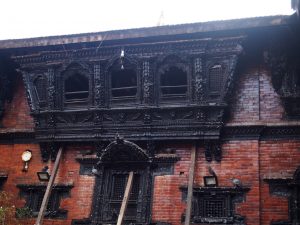 After spending some time at Durbar Square we just walked through the city and, as I said before, there is a lot to discover. At almost every corner you see a small temple, a market or some local street food. We believe you could walk around here for hours or days and still discover something new. The biggest problem could be finding your way back home. In the beginning we tried to follow a map, but we gave up after a few minutes and just wandered around. Sandra still has difficulties to find her way back to the hotel after two days, everything just looks the same! There are thousands of pigeons in this city, and it took just a few hours until one shit on Jens´ arm 😀

People in Kathmandu are very friendly and polite. They are very calm and even though the streets are loud and noisy nobody is really stressed out or yells at others. Even in Thamel where people try to sell you things, they do it in a very polite way – that can be a problem sometimes because it is even harder to say no. Just one example from last night: We had dinner at Momo´s Hut when it started raining heavily. When we wanted to leave the waiter asked whether we had an umbrella. When we said no he gave us two children´s umbrellas which helped us to get home dry. We didn´t have to return them 😉

The next day we went to Swayambunath temple, which is in the western part of the city and a short taxi ride away. This temple is also called the „monkey temple“ – if you look at the pictures you know why! There are a lot of pilgrims and some tourists and once you walked up the eastern stairs you get a beautiful view of Kathmandu. 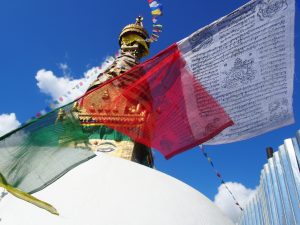 After these two relaxing days in Kathmandu we are now ready for Pokhara and our big hike! More pictures of Kathmandu will follow as soon as we got some time.

4 thoughts on “Getting lost in Kathmandu”